I decided to have a play with some of the new aggregation-esque platforms this evening... for a break from cutting code...So first off I had a play with dapper, turning the castle project's build feed (that's html) into an RSS Feed... It was painless, and required zero skill ... but it was limited in what it was capable of achieving... basically you can just just click on the content you want, give it a name, then pick which named parts will make up say an RSS feed. 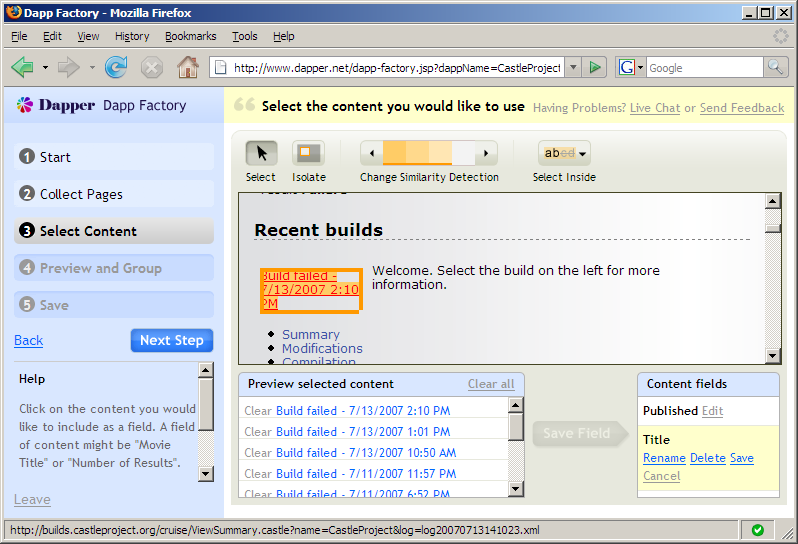 It's pretty elegant at what it does, though I think it's got a way to go before it'll parse some of the more tricky content out there.

The next thing I did was to have a go with yahoo pipes... I decided to do something pretty simplistic, aggregating the feeds from the Fisheye change log RSS for the castle proejct with the feed I'd created with dapper.net for builds.... this was a delightful drag and drop experience, I didn't even read a tutorial ... I just seems to "work" exactly as you would expect.

The resulting published pipe is here.

I didn't originally have the truncate step in the pipe, but had to add it after attempting to burn the feed with feedburner (it was over 512K in size, so feedburner politely said "no") after that it burnt just fine... as you can see: 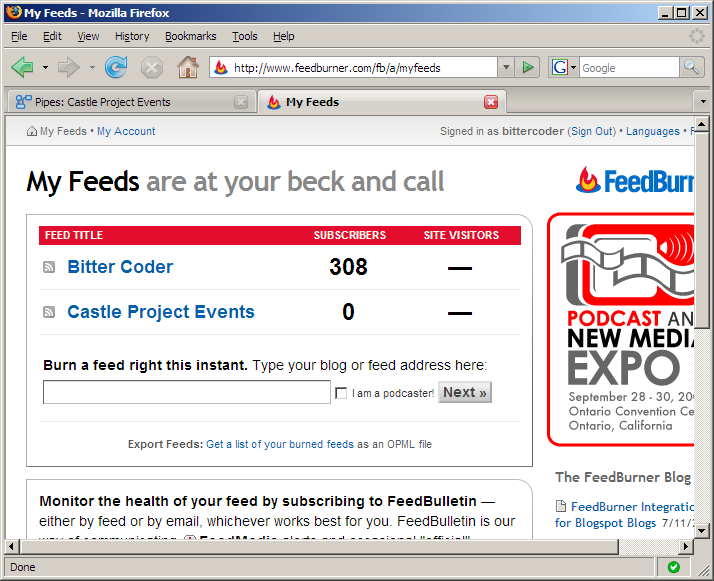 I couldn't get the two aggregate feeds to sort correctly, but I'm sure it's possible using yahoo pipe's, any new events should appear in the expected order though... you can subscribe to the feed here if your curious.

Of course the hosted platforms aren't much use if you need to handle private/local feeds or interact with other types of systems (like your private gmail account) and that's where I believe something like plagger comes into it's own... I haven't had a chance to play with it yet, but it's definitely on my list of things to do... there's still a lot of manual information management and categorization/organization that I'd rather hand over to some kind of automated agent.

[Disclaimer: I'm no expert on these kinds of things, I just figured there might be some other "head-in-the-sand" developers who haven't played with these kinds of sites, and might find it interesting like I did ;o]