Demonstrate all the things!

As you might have noticed, I have been doing a bit of work on API's in the past couple of months - and one of the things that has evolved out of this work, is my approach to demonstrating an API to an audience of developers and non-developers alike, for example during meetings to discuss progress etc.

I have tried a few things, including cURL, Fiddler, Javascript (with CORS) etc. in the past - but have settled on the combination of google chrome + a chrome browser add-in called "Advanced REST client", available from the chrome store for free:

It's a pretty basic tool (also why I like it..)

The main interface is geared towards sending requests: 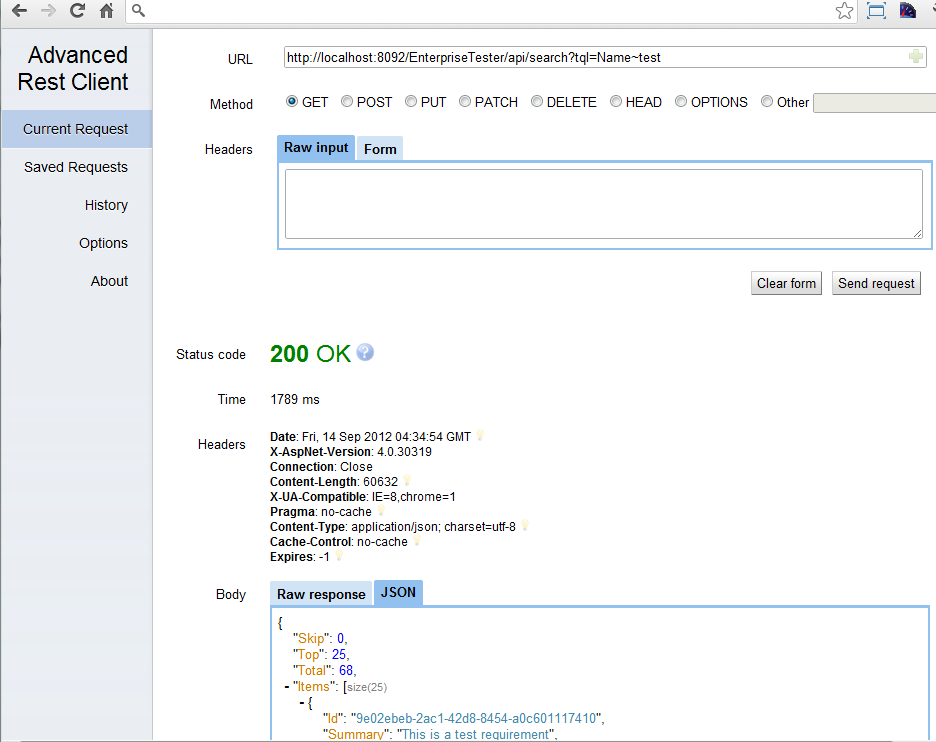 And here we can see the list of previously saved request (this will include the raw request body, headers etc.)

And here an example of a POST request, with a JSON body:

So to recap, advantages this tool has over some of the alternatives I have tried:

And of course, like any tool, it's not perfect - in particular:

But overall I'm pretty happy with it.

So, Are demo's important?

Obviously a demo is great to get buy in and upskill your whole team internally, or for getting customers up to speed on what's possible with your particular API.  But even more so an API is feature that provides very little value unless people use it, even less so then the 80% of the features in your App that are seldom used, as the cost of maintaining an API is high (it becomes part of the work you do for every release of your product once incorporated into your product).

Beyond the obvious though, the thing I have found most interesting is how demonstrating an API really focuses your attention on what's missing in your API from a usability perspective (especially with consideration to hypermedia) - I would rate this activity almost as high as attempting to develop a client for your API (another great way of finding missing features).

Give it a try, I think you will find it a really effective way to shake out bugs, oversights and general "cruftyness" issues in your API design.

In demonstrating an API, the approach I use is to first whip up a quick narrative or story for the parts of the API I want to demonstrate (thanks sublime text distraction-free mode!)...

One approach to use when trying the pique the interest of a mixed audience is choosing a story which demonstrates things you can do via the API which are not possible or easy to achieve via the user interface - Focus on points of difference, as opposed to what's similar, or appeal to past pain that an API might be able to resolve for them.

If you want to know after your demo if you got the narrative right, just observe your audience... far-away looks in peoples eyes and lack of questions == story they don't care about.

When doing this I try to avoid:


And I also try to incorporate:

Once I have my narrative sorted out (and have included some queues in the story to remind me about things like switching to UI etc.) then I'm ready for a dry run.

At this point I work through each step of the narrative - this is normally where you become immediately aware of usability issues in your API:

These normally turn up as "smells" as opposed to outright bugs:

Errors when reusing responses as the body of requests:

This is a death move when demonstrating API's, but often not an issue when writing a client. If you make a GET request, you should be able to use the response in a PUT request without changing anything, even if some of the content is ignored.

Failures here indicate problems with adhering to the Robustness Principle (Be conservative in what you send, liberal in what you accept). Common causes for this failure are things like expanded properties and links, which adorn but don't necessarily make up part of the DTO underlying the API implementation, which might be rejected if you have an "error on missing member policy" in your JSON deserializer (normally only applies to an API written in a statically typed language).

Unable to locate/display the results in the UI

This is another common issue - normally because you have too much data in your sample set, or don't have features in your UI to navigate directly to an item by ID or Name.

There are a couple of ways to make this easier - either make it really easy to locate an entity by some kind of unique ID also present in your resource representations (In a thick client App I normally like to do this via a bespoke "go to' dialog, activated via CTRL+G).

Or (my preferred approach for a web app) include an "Edit" absolute URI as a link associated with your API resource, which can be used to navigate to the equivalent UI screen in your application - as an added bonus, the Advanced REST client will "linkify" these hyperlinks in your response - so you can just right-click, open in new window, and be taken directly to the equivalent item in the UI, making your demo very seamless.

Demonstrating from a data set that you can revert back to is also important, especially if you want to create a screen cast, where multiple takes may be required.  Any demo you do should be easily repeatable.

Also, for each request where you are making a request with a body or complex URI (i.e. maybe containing a search query) then use CTRL+S to save your request as well, this can be helpful in cases where you are having trouble during your Demo and need to get a known good response (requests are also saved in history, but this is limited to last 60 or so requests by default).

Also, remember to always use the Raw input / Raw output tabs in the REST client when copying a response for use in a new request - and explain this when demonstrating the API to people who might want to go and try your demo for themselves, as copy/pasting from the pretty-printed response tab, when not understanding JSON structure, can lead to people getting frustrated quickly.

At this point your live demo should go smoothly, but there are certainly some things to check off your list before starting:

Thought not strictly necessary - I think supporting session based authentication for web application API's really helps with the demonstration process - though security is important, and session is not a common use case for programmatic access to the API, as a learning aid it's very useful.

This advice only applies to API's in the small (what I have been working on mostly i.e. API exposed as part of an on-premise/hosted application) - For large public web properties and multi-tenanted applications, this is probably not a wise decision, depending on how the API is deployed, and I would revert to using Basic Auth for demonstration purposes, and probably use a different tool to the Advanced rest client plugin as well (say fiddler).